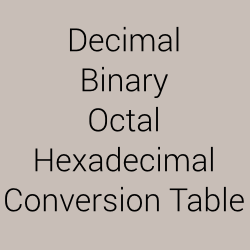 The earlier posts covered the detailed procedure step by step for converting a given number from one number system to another with exams.

The below table gives the equivalent numbers in the four number systems that we will be using in basic electronics.

This conversion table is nothing but a simple cheat sheet for performing mathematical and logical operations on the various number systems that we came across earlier, similar to the multiplication tables (from 1 to 20) that we asked to memorize in lower grade math class in order to perform complex multiplication and division operations faster.

This table will act as a simple speed up bonus to perform the mathematical operations among the number systems faster.